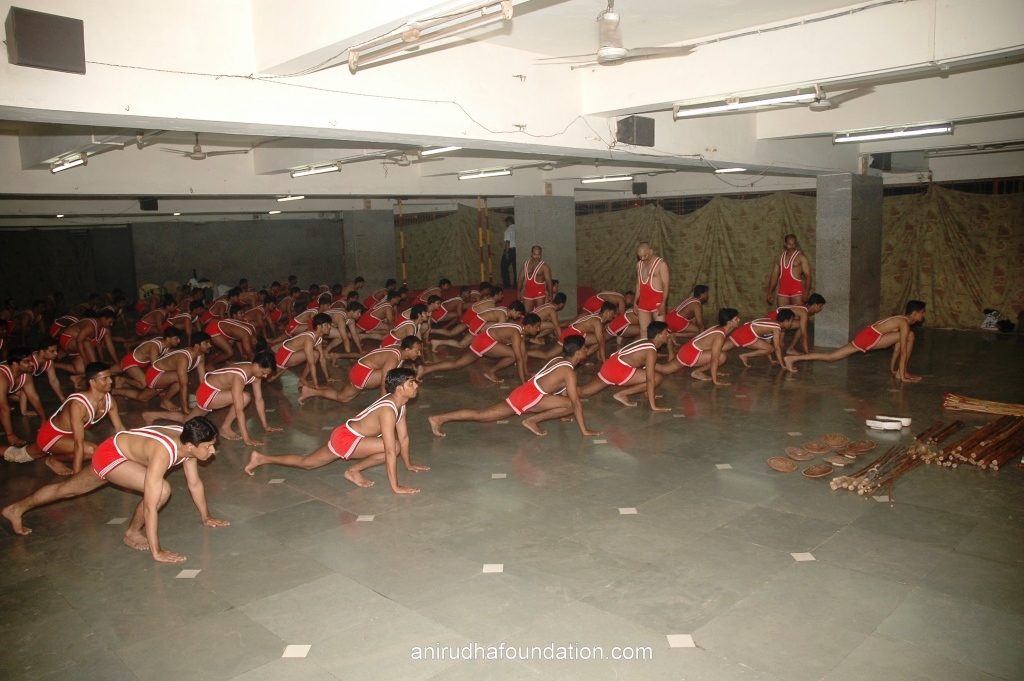 It is not necessary that a war should be won solely by strength, the intellect and mind should also be equally strong. This is because the game of war is not only played at the physical level but is also played at psychological and intellectual levels. Thus, it is essential to learn the ancient tactics of warfare and acquire training at an apt place.

Due to the recent life-staking competitive era and irregular lifestyle, the youth has become frustrated. This frustration has caused youngsters to neglect their health, the consequences of which can now be witnessed at large. At such a time, the multifaceted “Ancient Indian Balvidya” that revives our body, mind and intellect, will maintain their physical fitness. Besides, an impetus to mind as well as intellect will help them achieve success easily in their respective field of work.

If the abolished ‘Ancient Indian Balvidya’ is revived again to the fullest, it will restore not only the pride and prestige of our country but will also rapidly progress towards its betterment rejuvenating the golden era that it had once been known for. Thus, Dr. Aniruddha Dhairyadhar Joshi (Aniruddha Bapu) (M.D.- Medicine) has been practising and studying the ‘Ancient Indian Balvidya’ as its researcher and mentor for many years. It is after years of his diligent research, study and relentless practice that Dr Aniruddha Joshi, who is a well known and successful Rheumatologist,   has made these ancient techniques of Indian Balvidya open to all.

It would be fair to say that Dr Aniruddha has taken up the responsibility to revive the old techniques of the Ancient Indian Balvidya that includes Mudgalvidya, Suryabhedan etc. After attaining expertise in these techniques, Bapu trained Acharya and formed his group of students. Currently, the Indian Balvidya training classes are being conducted, under the guidance of Dr Aniruddha Joshi. 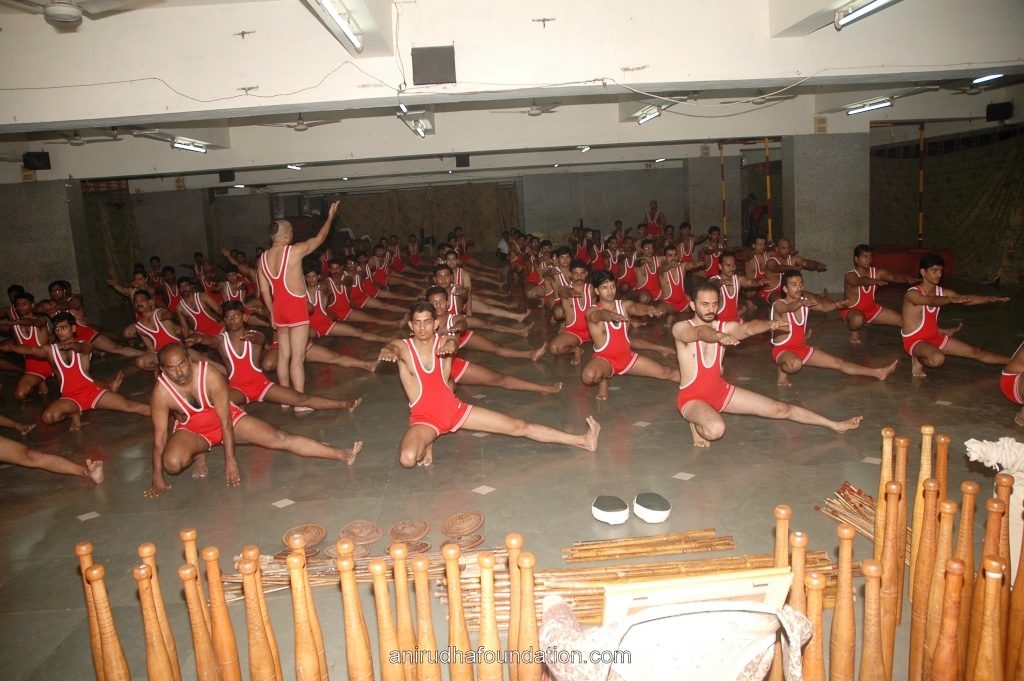 In the ancient period, 64 different types of arts and 65  different types of skills existed in India. Each of it had achieved a totality and rank of its own. Every individual, who was educated in these skills, had achieved an accomplished and complete personality. Such a person has always been capable of performing household, social and national responsibilities. The vast banyan tree of such skills and knowledge together is termed as ‘Bal Vidya’ that augments the energies of the mind, body and the intellect.  Likewise, it strengthens the mind and intellect to function in unison.

Well, Indians, then, had no practice of maintaining detailed history in writing and so, many a time,   the observations on ancient India made by foreign tourists, prove to be more informative and were perceived as reliable more than Indian texts and scriptures. Even though ancient India was divided in different provinces and states with different languages spoken in different regions, their traditions and cultures, geographical conditions as well as different ways of worship, the learned and virtuous sages in India were able to transcend the limitations of all these factors and played a significant part in keeping India intact and united traditionally, spiritually and education wise, to preserve unity in diversity.

Sages such as Agastya, Vasishta, Angiras, Parashar, Bhardwaj, Shaunak, Yagnyavalkya, Bhruga and Vishwamitra strived to maintain this oneness by consistently travelling around the world and preserved it according to the tradition laid by    Sage Vedvyasa. The explorers from Greek held all the traditional Indian Education systems and Gurukuls in the highest regards and proclaimed Indians to be proficient in these systems.

Megasthenes too has written that ‘Indians are highly competent in performing Malla-Yuddha and that they apply icky oil on their body, get a rigorous massage followed by a bath.’ Professional masseurs have had existed since ancient times. These people would warm up their bodies by practicing push-ups, rotating Mudgal (mace), playing with Laathi-Kaathi, Javelin, Sword (weapons). India was known to have large Ashrams in those days. Some of such popular Aashrams were-

Shri Parshuram himself observed and perceived all the forms of Indian warfare, Mallavidya as well as sports and its teaching methods  from around the world and designed his Balavidyasankul (wrestling curriculum) out of it, which he introduced with the regular study in his Ashram. The Balvidyasankul included various Balvidyas, given as follows:

Tridha  Balvidya
According to Lord Dattatreya’s wish, Shri Parashurama compiled the Balvidya dispersed in different regions and different Ashrams with his incessant efforts, studying it profoundly and conceptualised a curriculum called ‘Tridha Balavidya’. Its three main parts are enlisted below:

Until then, Mudgal was popular with different names in different regions such as Dand, Kaldand, Musal, Hekat and Onda.  Shri Parshuram is said to design its current shape and establish its study and use of the weapon with the blessings of Goddess Raktadantika. Lord Hanumanta too is believed to be an expertise in  Mudgal.

“Defence is Defeat, and Attack is best Defence” is considered unacceptable in Mudgal Shastra. In fact, Mudgal Shastra aims at performing attack and defense at the same time in one blow. Mudgal Shastra is also familiar as Dheershastra, Kanthmusal and Asthidand in some parts.

Shri Parshuram’s Mudgal Vidya is not just limited to physical techniques. In fact, its practise inculcates and nurtures concentration, the power of observation,  analysing opponent’s strength,  infallible decision-making and intuitive alertness within self.  Shri Parshuram has devised all the Mudgal exercises in the same manner.

2) Vajramushti – Every Indian is familiar with the word ‘Vajra’. The king of Gods, Lord Indra created this weapon from the bones and ashes of Sage Dadhichi and triumphed over a mighty demon named Vrutrasura.

Vajramushti does not merely focus on strengthening the hands and its grip, but also on increasing strength, capacity, courage, endurance, stamina and energy of every part of the body on the field. Although a person trained in Vajramushti Vidya may seem slim and slender, the slightest blow by him can slam a wrestler to the ground.

3) Suryabhedan Vidya – Amongst the 12 aspects of Suryabhedan, the namaskar performed with chanting mantras is its first aspect and the one that purifies the Muladhar Chakra (Root Chakra) of the body and ensures that it remains purified, that gives us the ‘Muladhar’ (Supporting root) is its twelfth aspect.

The practice of Suryabhedan makes the process to attain Abhyudaya (Zenith of prosperity and success in the material world) for an individual, i.e. strengthening the three entities, body, mind and intellect, equally and collectively and surrendering it to Mahapran, effortless and easy. Such an individual receives the grace and balanced glory from both, the Sun and the Moon.

Dr Aniruddha says, “When advanced and more dreadful weapons are being made every day. One might wonder, ‘How effective would the Ancient Tridha Balvidya against these missile and nuclear weapons, or rather a handmade bomb be?  ’The fact is that the Tridha Bal Vidya, unlike nuclear weapons, does not cause worldwide destruction, but it enhances an individual’s capacity and competency in any given domain. Also, we must bear in mind that the person wielding a weapon is more important than the weapon itself and so,  the Tridha Balvidya creates brave warriors who can flawlessly understand the use of weapons and its significance.

Most importantly, Shri Parashurama himself protects the sanctity of this vidya, in his Ativahik roop(the form that is intelligent and sentient), shunning the possibility of it being misused. I firmly believe, each weapon in the eighteen hands of my Mother is ready to protect every student of Balvidya who remembers her while learning it.” 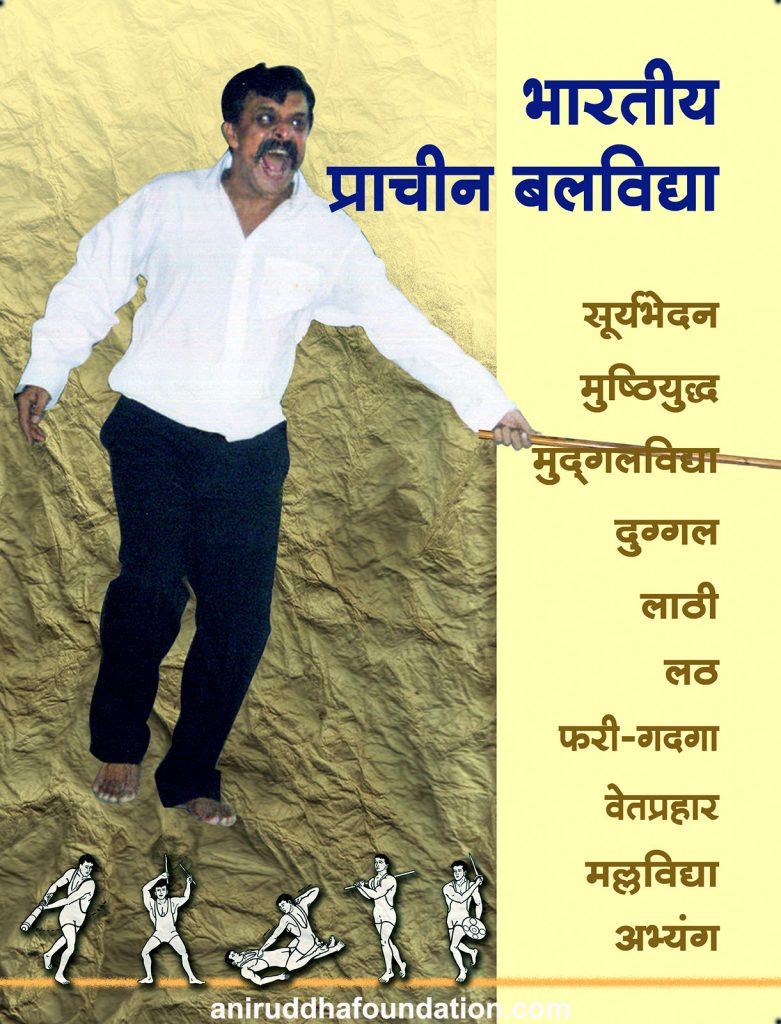 On the basis of the training imparted by Dr Aniruddha Joshi and the techniques taught in the Balvidya classes, a book titled ‘Bharatiya Prachin Balvidya’ was launched on the occasion of Vijayadashmi dated October 24, 2012. The book covers the art and skill of Balvidya as well as the study of its moves in a proper and detailed manner. Proficiency can be achieved more accurately and that too at a rapid pace with this book, if referred for practice only after completing training from a skilled trainer. The exercises are depicted with the help of sketch-figures, which will certainly prove helpful for the trainees to practise these techniques with utmost convenience. The youth of our country can reap enormous benefits from the book.

Although this subject may seem complicated to understand, there are no such secrets to be revealed here, and this is the intent, to make the ‘Ancient Indian Martial Arts’ open to all in the form of a compiled book for learning. This textbook comprises the techniques right from the basic level to the highest so that they can be practised in entirety. Every method has been categorised and briefly described for the readers’ convenience.

However, this textbook cannot be considered a substitute for a trained supervisor. The purpose of this textbook is to have an elaborate idea about each technique, only for personal reference- hence, that’s how it must be utilised.

These techniques cannot be mastered just by reading from this textbook, but ought to be learned under the guidance of a trained instructor, or else practising with half-baked knowledge can cause injury.

Bapu says, “ My contribution to the creation of this textbook is absolutely nothing. Each of the tact and information is what I have garnered over the years from various sources at different levels and has been imbibed in me by the grace of Lord Hanumanta. So I surrender this textbook at Lord Hanumanta’s Lotus Feet.”

This textbook of Balvidya can be purchased at ‘e-shop Aanjaneya’