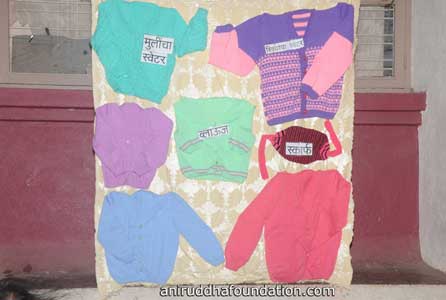 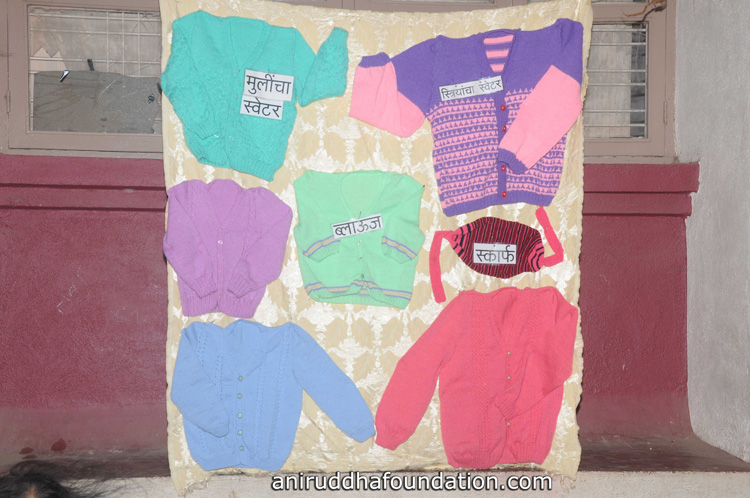 A severe shortage of warm clothes for the winter season is a challenge for the population that lives under the poverty line in India. During such times, to protect themselves from the brunt of the cold weather, even the most basic sweaters are not available to them and purchasing one is out of their capacity. We often come across deaths reported due to the severely cold winters and include children as well as senior citizens at large. This population is, for this reason, provided with sweaters knit under the project of Vaatsalyachi Ubb (warmth of care, love).

The project is run by the ‘Ahilya Sangh’, under the guidance of Sadguru Shree Aniruddha. Shraddhavans perform the Seva (devotional service) of knitting the sweaters from wool. Under the project, sweaters are knit for newborn babies, children below the age of ten and senior citizens. Apart from sweaters, caps, socks, mufflers and monkey caps are woven as well. So far, Shree Aniruddha Upasana Foundation and associated organisations have distributed approximately 22,000 sweaters.

Shraddhavan women, who wish to participate in the Seva for knitting sweaters, are imparted training through the Ahilya Sangha, free of cost. The training period is of 6 months, and the sessions are conducted twice a week.

For many homemakers, the familial responsibilities are eased after the age of 50, and thus they have some free time on their hands. They can, therefore, utilise their time to knit sweaters. Consequently, many Shraddhavan women participate in the seva. The sweaters which are, thus knit with love and without any expectations, provide the warmth from the wool to sustain the winter, which is believed to provide care as that of a mother. Moreover, several Shraddhavan women chant the name of God and their Sadguru during the Seva. The Seva is, therefore performed hand-in-hand with Bhakti. The warmth generated through such selfless seva grants endurance to firmly withstand the adversities of life.