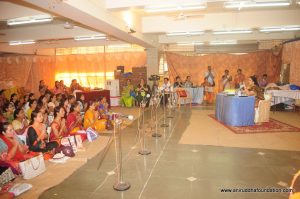 Women are currently making progress in many fields, and have even stepped into professions which men primarily dominated. Some, however, hesitate to commute by themselves still, do not raise their voices against injustice, on the one hand, while there also remains a void of confidence in a few, who wish to accomplish many goals, and indulge in self-doubt over their capabilities. In such a situation, what if a woman stepped forward and decided to inculcate positive changes amongst such women? Yes, for only a woman can understand another. Only a woman can understand another woman’s troubles, shape and bring about the much-required changes in her. Every woman inarguably possesses strength, she does. All she needs is the realisation of the power she holds. Thus, empowering a woman by evoking self-confidence is  ‘Aatmabal’.

Every woman possesses unique hidden talents, and when they receive a boost at the right time, she unwaveringly takes forward strides. This is precisely what can be witnessed in ‘Aatmabal’, but then what exactly is it? It cannot be defined briefly. One would have to step into its class to explore the vast odyssey of Aatmabal.

The foundation of the Aatmabal course –

The Aatmabal course was established under the guidance of Sadguru Shree Aniruddha and his wife, Dr (Mrs) Nanda Aniruddha Joshi. One of the many projects run under the banner of ‘Shree Sai Samartha Vidnyan Probhodini’ is Aatmabal – the self-development course for women. In 1998, the first batch of Aatmabal was declared which comprised of only 28 women. Nevertheless, 1500 to 1600 women have completed the course until 2016-17. Women travel from places such as Aurangabad, Jalgaon and Nandurbar as well to participate in the class. Moreover, along with Mumbai, the course is also conducted in Pune.

Mrs Nanda Aniruddha Joshi has completed her Master’s degree in Biochemistry from the University of Mumbai. Also, she has studied and maintains a keen interest in Naturopathy. She is proficient in the Braille language and has taught it for over three years.

For many years, Dr Swapnagandha Joshi has been successfully running the Aatmabal project, which strongly imbibes a sense of self-confidence within every woman. Women are observed to have undergone tremendous change throughout the program. Moreover, women who do not know English are taught the basic necessary communication skills in the language useful in day to day life at Aatmabal. As a result, the fears of speaking in English are alleviated.

The Nature Of the Course

The Admission Procedure and Duration

Every year, an announcement for the enrolment into the Aatmabal course is made at Shree Harigurugram (Bandra) or the Upasana Centres on Saturday. Subsequently, the registrations for the batch begins for the year. The candidates for the course are selected as per the guidance of Nandai. Also, the Aatmabal course takes place over six months, wherein the classes are conducted every Saturday from 3 pm to 7 pm at Shri Hari Guru Gram (New English School).

The Projects Covered Throughout the Course

During the course, Nandai interacts with the women on several subjects. They seek guidance from her on various topics ranging from the significance of relations, time management, maintenance of home electronic gadgets, cleanliness, tips for the kitchen, food recipes and personality development. Managing both fronts, home and work is a balancing act for women. Nandai dispenses advice on making time for the kids and home while at it. Furthermore, she also provides directions to the home-makers not pursuing jobs on how the time at hand, after the woman is done with her home chores in a timely manner, can be well spent in other activities and how she can nurture her talents. 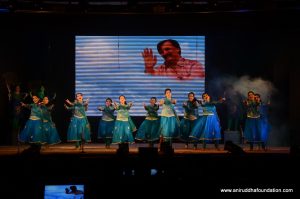 Knowing the English language is the dire need of the present times. If we do not familiarise ourselves with it, we would be left behind in today’s dynamic age of globalisation. One must have the confidence of speaking fluently at banks, post offices or other institutions that are a part of our everyday lives. And, it is, therefore, that development in the English language receives a particular focus in Aatmabal. Hence, sincere efforts are taken towards the betterment of the language for the women who do not know how to speak in English at all. Likewise, for the ones who do, they are trained to develop their skills in oratory in necessary measures.

A group of about 15-20 women are assigned a project on a specific topic. They then research the topic, gather information on it, and then come together to set a play and perform it in the English language. Simultaneously, they also create models by making the appropriate use of scrap materials. The projects are based on a wide range of subjects that include the places of pilgrimage (Teertha Kshetra) associated with the organisation, banks, post transactions, wholesale markets, S.T. (bus service), railway and airline bookings and so on. It helps eliminate the stage fright that the women harbour. Moreover, they also learn to voice their opinions confidently.

The Aatmabal course, exclusively includes a session on Disaster Management. During the session, the volunteers of the Aniruddha’s Academy of Disaster Management (AADM) explain the do’s and don’ts in the event of a disaster as also offer training through demonstrations.

The course is an all-inclusive one which also provides guidance on women’s diseases from experts, various food recipes, efficient use of the microwave, and the like, through multiple sessions. Also, one of the sessions covers the importance of vermiculture. Additionally, information on sowing seeds and nurturing plants is also elaborated upon during a session.

The creation of beautiful D-I-Y handicrafts such as lanterns and clay lamps are also demonstrated in the least possible expense in the course. Hence, women very fondly make Diwali lamps and lanterns by themselves and decorate their homes during the festival.

At the end of the course, handicrafts, best food preparations from an in-house recipe contest, project models, files and the skilfully-made objects are put up on display in an exhibition. The exhibition is worth a watch. Moreover, select-few food recipes have been compiled and published in the form of a recipe book.

Every year, the Aatmabal organises a picnic for the ongoing batch. Arrangements for the breakfast and lunch of the Aatmabal students are made with proper care. All the students thoroughly enjoy the class picnic.

Every woman is presented with a certificate on the completion of the course.

After six months of Aatmabal classes, the Aatmabal Grand Finale is arranged. The women, who had never even stepped on a stage in their life, not only participate in the programme but also make the event a success.

In the finale, women perform plays on specific topics and convey a heartfelt message. They also perform acts of singing, dancing, and the like. The programme then concludes with an eloquent dance.

On the completion of 13 batches of Aatmabal, an Aatmabal Mahotsav is organised. The 13 batches comprised of women right from the first batch of the course.

The event took place on the 5th and 6th of November, 2011. There were about 1300 women from Mumbai as well as Pune, who had participated in presenting jokes, dances, skits and also morally appealing plays as even ones on social causes in the Mahotsav. Some of the women narrated their personal experiences on how Aatmabal had transformed their lives positively – a documentary of which was shown at the Mahotsav. Every woman from Aatmabal, even though it may have been a minor role, participated in the Mahotsav. Furthermore, a carnival was organised for the students who were unable to devote time to perform on stage.

The carnival comprised of one group from each of the past batches, making it a total of 13 groups. Each group was assigned one project from Sadguru Shree Aniruddha Bapu’s 13-Point Programme, which they then presented. Every woman’s commitment level, their love, respect, devotion towards their Sadguru – all such emotions outpoured as they wholeheartedly venerated their Sadguru. Every woman in Aatmabal took utmost efforts to make the event a huge success. The support given to each of these women by her families was of great importance all the same. It is incredibly admirable that such an event was carried out successfully without any disputes despite participation from women in large numbers on one platform, all of which was only possible due to the Aatmabal Mahotsav.

A DVD of the event was released, and an exclusive social media page has also been created for the Mahotsav, which has received an incredible response. Also, a special note of the program was made from a resident in Sweden, expressed in the form of a letter.

The nature of the Aatmabal course changes every year as per the rapidly changing times. Two batches of Aatmabal were conducted especially for women who are home-makers, which received a good response. Most of the women in the batch were ‘Housewives’ until that point, but Aatmabal gave them a new, dignified identity of being ‘Home-makers’. Some of the women were even unable to commute by a taxi-cab or train, but they acquired the self-confidence to travel by themselves after the Aatmabal course. Not only that, but Aatmabal also induced positivity in their lives to such an extent that the commotion in their homes was silenced, and they began leading their lives with much peace.

Every woman has earned a new identity after the completion of the Aatmabal course. Their hidden talents surfaced during the course, and they received the strength to fight against injustice. They are now advancing in any field with confidence. What’s more is that they are overcoming any adversity with ease while holding on to their faith, for all of them are Bapu’s ‘Veeras’ (warriors).