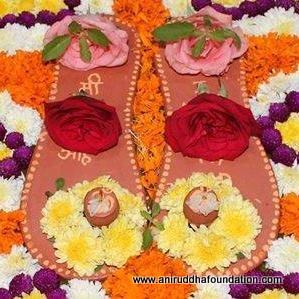 While Shree Ram was living in exile, Bharata reached the Chitrakoot mountain to bring his adored elder brother back. This tale of Shree Ram-Bharata meet is recounted and revered all over across India. Abiding by his father’s promise given to Mata Kaikeyi, Shree Ram refuses to return and lovingly orders Bharata to return Ayodhya and fulfill his responsibility. With heavy heart, Bharata who is set to leave for Ayodhya to obey Shree Ram’s order rests his head on Shree Ram’s feet. Bharata’s tears wet the feet of Shree Ram.

The ever-gracious Lakshman and Sita were aware that it was not possible to separate Bharat from the lotus feet of Shree Ram. Thus, they asked Bharat to take Shree Ram’s Padukas back with him. This is the first ever Paduka Poojan performed of the Parmatma in the Universe. Performing Paduka Poojan is a novel opportunity for every Shraddhavan to express his or her gratitude (Ambadnyata) towards their Sadguru.

The month of Margashirsha (according to the Hindu calendar) is considered divine and is of paramount importance. Thus, Shraddhavans celebrate the Shree Sacchidanandotsav in this month for either one and a half days or even five days. In this Utsav, Shraddhavans perform the Paduka Poojan of the Sadguru Padukas, created from the paper pulp of the Ramnaam books with utmost devotion.

The Sacchidanandotsav is celebrated every year from the second Saturday of the Shukla Paksha in the month of Margashirsha. The Sacchidanandotsav begins with the Poojan to welcome and worship the Sadguru Paduka’s at the home of Shraddhavans. Then onwards, the Padukas are worshipped regularly during their sojourn (i.e. 2 or 5 days). At the time of immersion, Shraddhavans perform ‘Punarmilap Aavahan’, a poojan to retain the presence of Sadguru at Shraddhavan’s home till next year. The details are mentioned in the Sacchidanandotsav booklet.

The purpose behind celebrating the Sacchidanandotsav is to keep the sentiment of love, gratitude and surrender ever-rising in the lives of Shraddhavans. 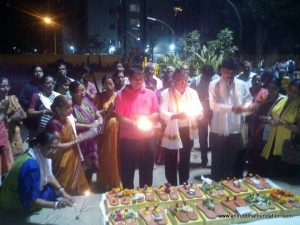 The performance of Paduka Poojan in the month of Margashirsha opens the corridors of development and the way of reaching (elevating) to the Parmatma. When Shraddhavans perform this Paduka Poojan, it initiates the functioning of their Mana (mind), Prana (life-force), Pradnya (the centre that produces stimulant energy) to rid them of the disparate elements present there and grants them the Ananda (Felicity).  The recitation of Aniruddha Atharvastotra during the Sacchidanandotsav destroys the volatility in the lives of Shraddhavans and grants them Guruteja (The divine enlightenment). The Sacchidanandotsav leads Shraddhavans from volatility to the stable, yet a broad spectrum of Guru. i.e. from instability to a peaceful and steady growth, leading them to contentment from misery. While walking the path of Bhakti, it is imperative for Shraddhavan to strike a balance in their Mana, Prana and Pradnya to be able to achieve Parmartha (aim) and Prapancha (worldly life) simultaneously. Thus, in the Sacchidanandotsav, all the Shraddhavans perform the Sadguru Paduka Poojan, recite the Aniruddha-Atharvastotra and the Aniruddha Ashtottarshat Namavali and pray to Sadguru Shree Aniruddha to help them attain a balance in them.

Moreover, it is Shraddhavan’s firm conviction that Kali can never stall the progress of a person, who welcomes and worships the Sadguru Padukas at home.’