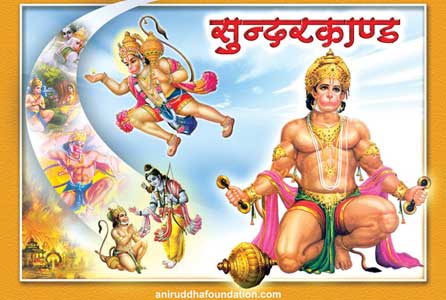 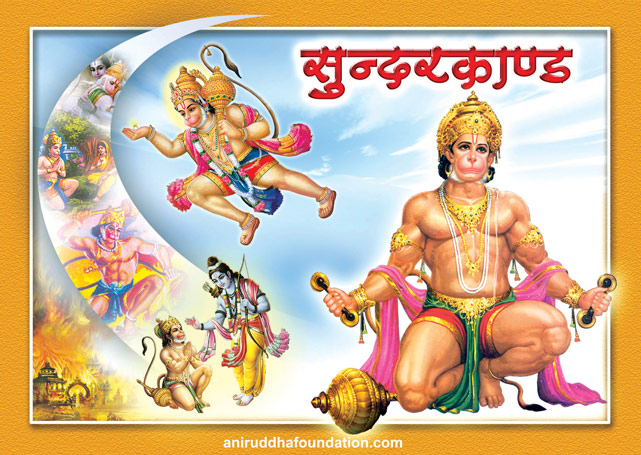 Ramayan composed by the great saint Shree Tulsidas is recited all over India. In “Kaliyuga”, (The Tulasi Ramayan)  has enabled the spread of “Ramnaam” and the worship of Lord Shree Ram, far and wide. The Valmiki Ramayana was composed several years before the birth of Lord Shree Ram; whereas the Tulsi Ramayana was composed thousands of years after the Valmiki Ramayana’s composition. Sadguru Shree Aniruddha (Bapu) while glorifying the greatness and virtues of Saint Tulsidas had said, “Every breath of Tulsidas was deeply connected with the “Ramnaam” and the moment each one of his heartbeats connected with it, at that very moment, the Mahapraan Shree Hanumant, himself appeared before Tulsidas. He brought the entire “Ram Katha” (the story of Shree Ram) alive, before Tulsidas’ eyes. Shree Tulsidas then composed the “Shree Ram Charita Manas” – the Ram Katha while witnessing it all with his own eyes.

Shree Aniruddha Upasana Foundation had organized an event for the Sunderkand recital, poojan (worship) and Abhishek (consecration), during the period from May 17th to May 21st, 2016. The Sunderkand poojan and its continuous recitation was carried out as per the Vedic traditions, every day from 9 am to 7 pm. During this period, the Sunderkand was recited 108 times every day. Thousands of devotees participated in this recital on each day along with the “Prapathaks” (chief reciters). As a result of this collective recitation, the Sunderkand was recited innumerable times at the venue. In the same year, a continuous recital of the Sunderkand was also organized at the Gurukshetram in the month of January. It was recited 1200 times at the event. This recital was carried out at the “Gurukshetram” according to the Vedic rituals for the pooja and archana (sacred offerings) of the Rampanchayatan idols from the place of worship at Bapu’s residence.

If one was to ask “which is the greatest (best) thing about the Ramayan?” It would be the Sunderkand. Every chapter in the Ramayan has been named based on the events taking place in that chapter. However, there is only one chapter, which is an exception to this rule and that is the Sunderkand. The essence of the “Ram Katha” is the Sunderkand. That is why, the great saint (Maharishi) Valmiki entitled this chapter so”, emphasises Bapu.

The Sunderkand is the story (narration) of  Hanumant, who as directed by Lord Shree Ram, flew to Ravan’s Lanka at the southern tip of the erstwhile Bharatvarsha in search of Sitamata; met her and conveyed Shree Ram’s message and then his return after burning down the Lanka.

The Sunderkand, which is a part of the Ram Katha is the most auspicious, beautiful, radiant and magnificently mighty peak in all of the Ramayan. The Shree Ram Katha not only brings an end to all obstacles, sins, sorrows and dilemmas, but it also gives rise to sublime devotion. It annihilates all the evils of a Shraddhavans’ life. Therefore, Saint Tulsidas describes it as the “Mangalabhavan Amangalahari”, the one that brings about prosperity (mangal) and destroys all evils.

Sadguru Shree Aniruddha, in his first editorial on the Sunderkand that was published in the Dainik Pratyaksha, had mentioned that “The Sunderkand is all-encompassing. It is filled with everything that is required to guide an individual through life, for his or her personal development, for performing one’s worldly duties (prapancha) and for achieving the paramartha (the ultimate purpose of life). Not just that, but if one avails the guidance in the Sunderkand, it holds the power to provide strength for uplifting one’s entire life, for attaining happiness, peace and sheer contentment”.

Bapu is writing editorials on Sunderkand since the year 2007 (May 3, 2007) from Narad Jayanti (birthday of Devarshi Narad). Bapu, through his editorials appearing under the column entitled the “Tulsipatra” (symbolising the purity of the Tulsi leaf), has elaborated the meaning of each and every verse in detail and in the process, he has unfolded many tales, referencing them to the history of the universe. So far, more than 1500 editorials have been published under the column Tulsipatra, which releases serial articles.

During his discourses, Shree Aniruddha has on many occasions explained to the Shraddhavans, “The Sunderkand from the Tulsi Ramayan includes the greatest prayer and blessing in this world. The Mahapran (the Holy Spirit) Hanumant meets grieving Sitamata in the Ashokvan, conveys Shree Ram’s message to her and allays her grief. Sita’s prayer to Shree Ram during this dialogue and the message she sends back to Shree Ram with Hanumant is the greatest prayer in this world”.

O my Lord, the one who eliminates the woes of the poor and desolate, take away my enormous adversity.

Thousands of Shraddhavans regularly recite the Sunderkand as per Bapu’s guidance.