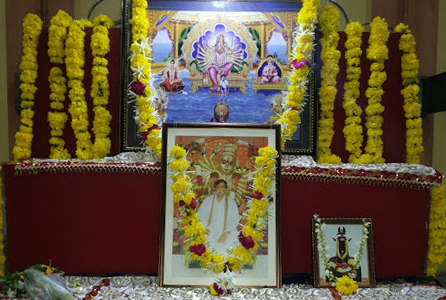 On May 6, 2010, Sadguru Shree Aniruddha guided his Shraddhavan friends on ways to establish the ‘Ramrajya’ (Kingdom of Ram) in the society as also in their lives, in his discourse on the Ramrajya.

Sadguru Shree Aniruddha Bapu had said, “The Ramrajya meant a state akin to the one King Ram reigned over. Becoming like the citizens of Ayodhya, developing society and social order like Ayodhya, resulting in a corresponding response from the society as a whole is what the Ramrajya means.” 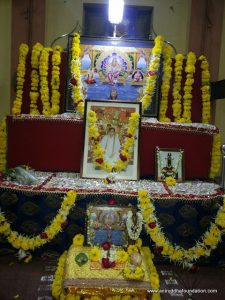 Sadguru Shree Aniruddha had declared a few projects that would allow establishing Ramrajya on a personal, domestic and social level. Furthermore, he advised to personally perform certain upasanas as also following certain other religious practices which included the Prapatti for both men as well as women.

While speaking on the subject, Bapu had said, “The word ‘Prapatti’ simply means ‘surrender such that averts adversity or misfortune.’ Sharnagati means surrendering yourself to Aadimata Chandika and her son, the Trivikram with the sentiment – ‘You and you alone are my support’, ‘my one and only support’, ‘I hold firm faith in no one else but you’, ‘complete, total honesty’. Accepting the Gurukshetram mantra with sheer faith and reciting it daily makes it the ‘Nitya Prapatti’. Moreover, the Naymittik Prapatti (periodic prapatti) comprises of the ‘Ranachandika Prapatti’ for men and ‘Shree Mangalchandika Prapatti’ for women. Bapu had said that the two prapatti make every man and woman alike, valiant soldiers in the worldly and spiritual life.”

The capacities of women and men both differ considerably, a distinction created by nature itself. Hence, for women, the prapatti has been presented only on one day of Makarsankranti, whereas for men, on the Mondays of the Shravan month.

How should one perform the Shree Mahadurgeshwar Prapatti? 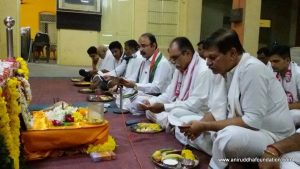 The male Shraddhavans may gather and offer the prapatti after the sunset. The prapatti is performed in the Shraddhavan dress code (viz., a white shirt, a Lungi and Uparna). The prapatti is initiated by chanting the Gurukshetram mantra five times, followed by the chanting of the Shree Mahadurgeshwar mantra 11 times. After that, a wonderful story full of Bhakti on the Shree Mahadurgeshwar Prapatti is read out aloud. The tale recounts the significance of offering the Prapatti on Mondays in the month of Shravan and the changes it brings about thereafter. The story provides us with strengths of all kinds.

Later, the Dwadash Jyotirlinga aarti is recited, and Shraddhavans perform the aarti by moving the small poojan platter which is filled with the requisite poojan items around the arrangement and before the photo for the prapatti, in circles as done traditionally. After that, the Shraddhavans chant the ‘Bam Bam Bholenath, Bam Bam Bhole’ Gajar 12 times while they circumambulate around the prapatti arrangement. In the gajar, the Bam beej represents development, strength, as also grace. Moreover, the Balagangagauri or Mata Shivagangagauri, who rids one from all kinds of misfortune, is the ruling authority. The Trivikram is then offered yellow and white coloured flowers after which, he is offered the akshata (rice grains turned red with kumkum) and paid obeisance.