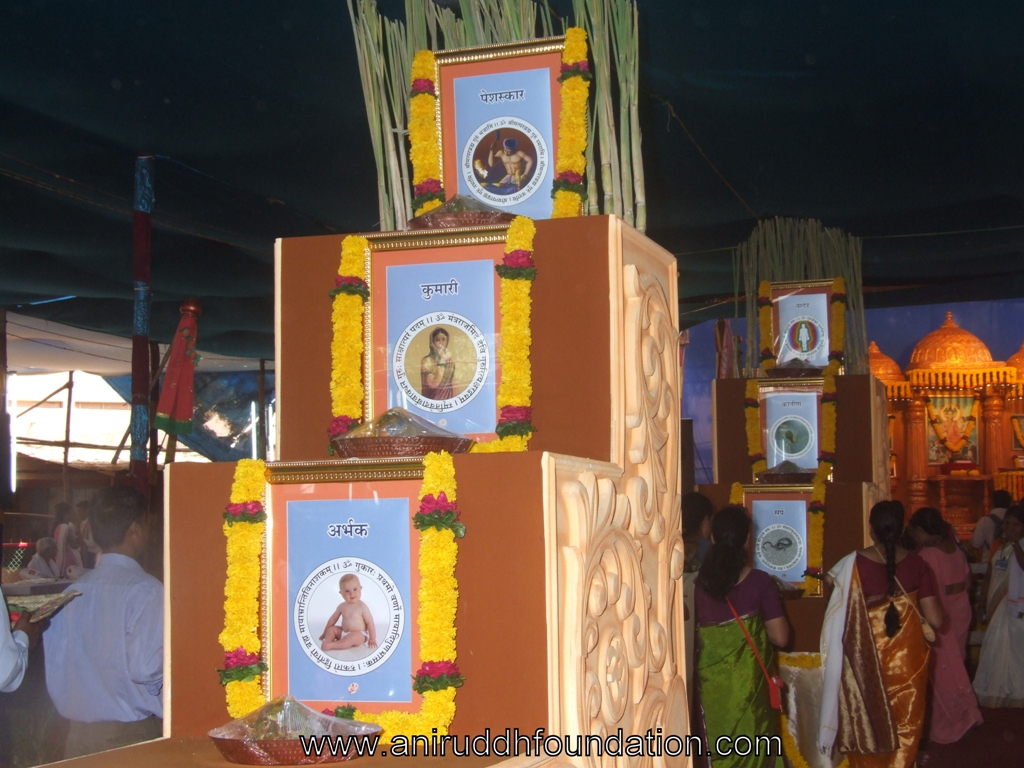 I am the one responsible for bringing my own progress. To make sure the conditions around me are conducive for my growth, I have to first reflect upon and change myself. To do this, my devotion is an important factor as also are the Sadguru’s resolution, and one such resolution is “Shri Avadhoot Chintan.”

What is “Shri Avadhoot Chintan?” “Shri Avadhoot Chintan” is an event that occurs very rarely. The event was described as extremely fantastic, divine and satisfying to ones heart. It was a combination of Shri Dattayaag, Niyati Chakra Parivartan Pradakshina, Sarvatobhadra Kumbhayatra and Shri Dwadasha Jyotirlinga Kailashbhadra Mahapoojan. Only after four Rasa yaatras and one Bhaav Yaatra, the establishment of the Dharma Chakra, the Vyankatesh, Jagannath, Gaayatri utsavs, the establishment of Gurukshetram, likewise as the upasanas in the Araadhana Jyoti book were completed in a specific order, did the Shree Avadhoot Chintan utsav take place.

The 24 Gurus of Shri Avadhoot Dattatreya are those 24 principles of this universe, which represent the 24 channels via which the blessings of Mahavishnu – Paramshiva – Sadguru Dattatreya can reach the shradhavans. The importance of these 24 Gurus was taught and explained to the shradhavans by Sadguru Aniruddha Bapu in the Shri Avadhoot Chitan Utsav. The utsav also taught shradhavans on what to ask for and what needs be rejected.

The important parts of Shri Avadhoot Chintan Utsav are Shri Dattayaag, Niyati Chakra Parivartan Pradakshina, Sarvatobhadra Kumbhayatra and lastly Shri Dwadasha Jyotirlinga Kailashbhadra Mahapujan. Every shraddhavan had the opportunity to witness and take part in these events. Sadguru Aniruddha Bapu, His entire family also participated in all the celebrations, as also in the Upasanas.

The human body, the human brain, the human mind and the soul were all provided the ultimate protection (Suraksha Kavach) after participating in this Dattayaag. The Dattayaag which was spread over 3 days should not be mistaken for the usual or simple ritual, albeit a beautiful one. The Dattayaag was the fruitful result of 11 individuals performing and completing rituals for the past 3 years.

The Dattayaag was performed with the help of the purest and the most energetic of the Vaidik Mantras. The fruitful gifts of this Dattayaag were granted to all the Shraddhavaans. The holy blessings of the Dattayaag, the Niyati Chakra Parivartan Pradakshina, which can also be called as the Dhanya Dhanya Pradakshina, provided all Shraddhavaans with a form of vaccine against any and every misfortune or distress that might trouble them now or in the future. The Niyati Chakra Parivartan Pradakshina is the vaccine that was obtained from this event, which acts in 24 independent ways on each human being’s 24 channels, and thus purifies all channels, that otherwise can be a cause of pain and sorrow for the individual. Every individual is stuck in the cross hairs of their own destiny. This destiny is related to the aura of that individual.

As a strong and independent individual,one does not have just the responsibility but also the strength and capacity to bring about a change their own destiny. One is truly capable of bringing about a change in my society. However to face destiny head-on and bring about this change by having a complete and unwavering faith in God. And because the Pradakshina gives one the strength to turn around destiny, it was named Niyati Chakra Parivartan Pradakshina. The meaning of Shri Sarvato Bhadra Kumbhayatra is the one that brings about an all-round welfare for us. We Indians always have a very beautiful wish, which has been consistent across for over a thousand years i.e. to complete the Shri Sarvato Bhadra Kumbhayatra. This trip or Yatra includes a travel to Kashi in the north to fetch the waters from the holy river Ganga in a vessel and travel with it all the way to Rameshwar, which is in the south. In Rameshwar, is the Shiva Linga on which the holy water from the river Ganga is offered. Thereafter, the water from Kanyakumari, which is near Rameshwar and having the confluence of three seas, is collected and then carried all the way to Kashi and offered there.

By worshipping the 12 Jyotirlingas, Shraddhavaans had the golden opportunity to clear off their vices and addictions, destroy their bad behavior and also at the same time propagate holy and pure thoughts within themself. To propagate thoughts that will help in leading a good life and to destroy the evil ones is the prime job of the Shiva Shakti, and Shraddhavaans had every opportunity to do so by performing the Shri Dwadasha Jyotirlinga Kailashbhadra Mahapoojan.

These were the 4 steps of the festival, which laid the foundation of making one’s life happy, prosperous, content and joyful along with the thought that every good action of ours is supported and backed by the strength of our Sadguru. Thus, this extraordinary Shree Avadhoot Chintan utsav was celebrated from 5th May, 2009 to 9th May, 2009 at Shree Harigurugram.

Sadguru Aniruddha Bapu’s effort was realized in the form of Shree Avadhoot Chintan  Utsav, with the purpose that every shraddhavan should become capable of receiving the Nav-Ankur-Aishwarya.