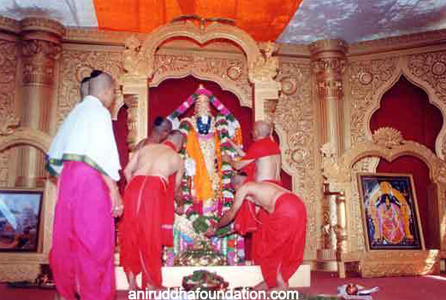 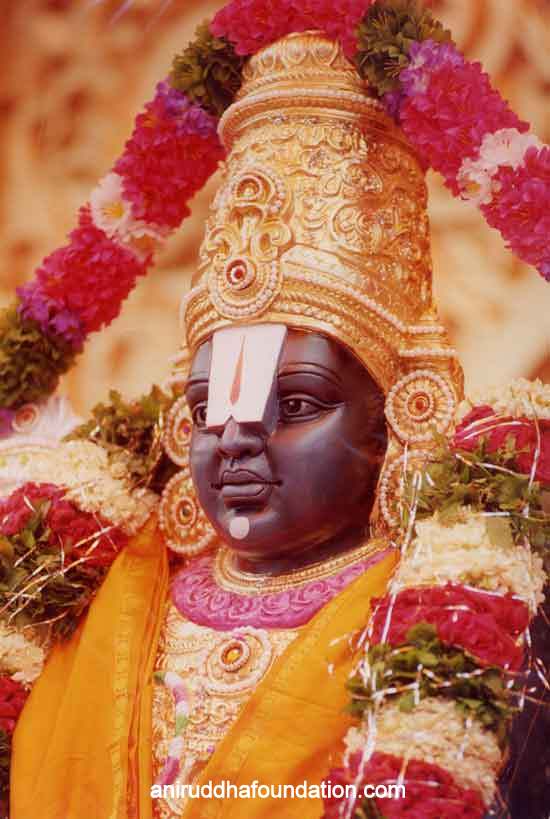 The Seshadri Mountain range in the Chittoor district in Andhra Pradesh needs no formal introduction. The Venkatesh Temple located on these mountains, which are also known by the name of Tirumala, Venkatagiri, Seshachalam, is a significant place of worship for millions of devotees from all around the world. 300 years ago, Sri Ramanujacharya had performed a  distinct upasana of Lord Mahavishnu Tirupati Balaji uniquely and beautifully. Sri Ramanujacharya conducted the upasana of his prime deity by performing ‘Saptakoti Archanam’ and chanting the eight -lettered mantra ‘ॐ व्यंकटेशाय नम:’ (Om Venkateshaya Namah).  The period when Sri Ramanujacharya chanted this Saptakoti (7 crore or 70 million times) mantra was between Vaishakh Vinayaki Chaturthi to Vaishakh Mohini Ekadashi.

In the year 2000, Sadguru Shree Aniruddha Bapu too conducted such a Saptakoti Jap for all the Shraddhavans to participate, from 7th to 14th May, which was also between Vaishakh Vinayaki Chaturthi to Vaishakh Mohini Ekadashi. This Utsav was organised at Shree Harigurugram, Bandra.

“The devotion, the affection, the love, and the sincerity, with which Sri Ramanujacharya performed this Upasana, if we could perform it even with minutest sincerity in our heart, there would be nothing as beautiful as that. Ramanujacharya was a great person. I’m nothing like him – we all may be way too far to achieve the greatness of Sri Ramanujacharya, but we absolutely must not hesitate to follow in his footsteps. Never worry about the thought of how small you are, compared to his greatness. Which path should I follow? It was the question that Shaunakmuni once asked his Guru, to which his Guru answered, ‘येनमार्गेनमहाजनागत:’ (Yen Maargen Mahaajana Gatah), which means ‘one must follow the path on which the great men stride’. There is no threat in doing so at all. Today, we have to follow and thoroughly explore this sacred path of Sri Ramanujacharya,” said Sadguru Shree Aniruddha to all the Shraddhavans before the event of Shree Vyankatesh Saptakoti Jap.

A 7-feet tall idol of Shree Venkatesh, like that of the original Tirupati idol, was erected at the Utsav. On one side of Lord Venkatesh was Goddess Padmavati and on the other, Seshagiri Venkatgiri. The ‘Saptchakra Sthapna’ (establishment of the Seven Chakras) was done in the idol while it was being carved. Before establishing the Saptachakras from the Muladhara Chakra to Sahastra Chakra in the idol of Lord Venkatesh, 49 chosen Shraddhavans recited various mantras relating to all the seven chakras, and seven other Shraddhavans recited the prime mantra one million times. Only then was the Saptchakra established in the idol. 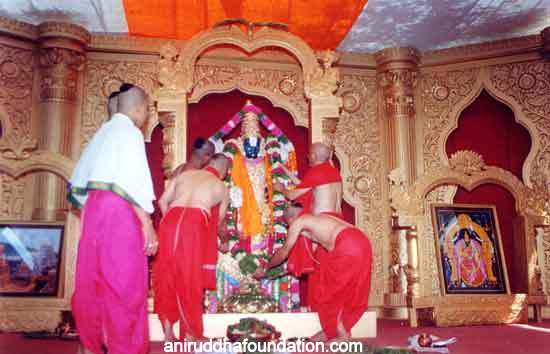 During the period of Shree Venkatesh Saptkoti Jap, the selected Shraddhavans would sit at their respective seats allotted to them, and begin chanting mantras at 8’o clock in the morning. The number of chants of this mantra rose as the Shraddhavans who came to take darshan also participated in it. Shraddhavans dedicatedly sat in two batches for 12 hours (each for 6 hours) for seven days to chant the mantra, ‘ॐ व्यंकटेशाय नम:’ (Om Venkateshaya Namah) 700 times (each batch) to accomplish the Saptakoti Jap.

The Saptakoti Jap (7 crores times) was accomplished in the morning on the seventh day itself, but the chanting continued until late evening that day as per Sadguru Shree Aniruddha’s guidance. A consecration (abhishek) of water from three seas (Trisagar Sangam Jal) took place on 14th May 2000 after the chanting was concluded. During this period, the male Shraddhavans wore the traditional attire, maintained the conventional hairdo followed in Tirupati and applied ashtagandha, which created an atmosphere full of bhakti.

Shedding light on the importance of the mantra, Bapu said, “Even though Sri Ramanujacharya chanted the mantra, ‘ॐ व्यंकटेशाय नमः’ 7 crore times, the mantra has truly been established by Goddess Shree Lakshmi, herself; and it was uttered for the first time by Lord Shesha’. Resultantly, every attending Shraddhavan sincerely chanted this mantra and departed, with the mantra engraved in their hearts. 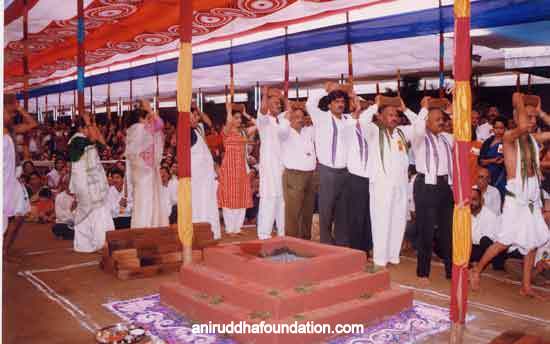 A ‘Paapmochan Kunda’ was also erected at the event. All the Shraddhavans were performing the Paapvimochan circumambulation around the Kunda, holding the Holy Brick (Ishtika) on their heads. The chant of ‘  ‘Govinda Govinda, Jai Vyankatesh Gopala’ went on during the circumambulation. The Ishtikas were made out of sacred soil and water of Tirumalai Sarovar and Padmasarovar. ‘Oh Lord, I may have made many mistakes until now, but may I commit the mistakes in the least hereafter,’ prayed Shraddhavans while circumambulating and chanting the mantra itself. Any Shraddhavan could chant this mantra and circumambulate as many times as they wished.

The idol of Venkatesh was decorated with the ‘Mahapushpam Haar’ (garland) each day. Even the Mahabhoga (Prasadum) offered every day was full of variety and very glorious. 1008 fruits were offered on first, and the fifth day, 1008 Ladoos were offered on the second and the sixth day, 1008 Puffed-rice Ladoos on the 3rd and 7th day, and nine quintals of curd-rice on fourth and the eighth day.  This prasad and the ones offered by Shraddhavans was then later distributed amongst the students, senior citizens and underprivileged people.

The aarti performed during this Utsav was very enjoyable. All the Shraddhavans despite the language barrier, learnt to sing the Kannada-aarti composed by the great Saint Purandardas and Saint Kavyetri ‘Devi Andaal’. This aarti would happen after every one hour. Sadguru Shree Aniruddha had explained the importance of this aarti on the very first day of this Utsav.

Bapu said, “If I want to lead a good life, then I have to be stable at first; and the beej (seed) that helps me achieve stability is the ठं (Thum) beej. The ठं (Thum) beej belongs to Lord Venkatesha. This beej belongs to Vitthal as well. Both of them are Balaji. This Panduranga from Karnataka is a Balmurti too. He is a Balgopa. Likewise, this Venkatesh too is a Balgopa. In fact, we worship both of them in the form of Balaji. We have to perform Upasana of this ठं (thum) beej.” Sadguru Aniruddha had also narrated the tales of Venkatesha and Vitthal in his pravachans which in turn helped Shraddhavans to connect more to these deities. 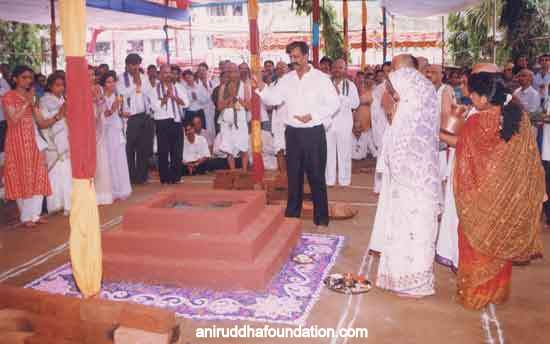