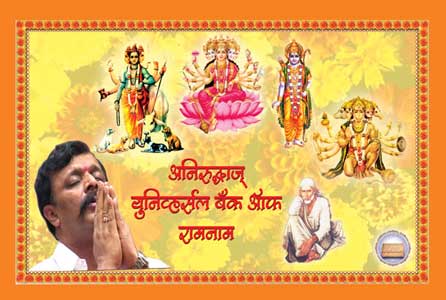 “The Ramnaam (the name Shree Ram) is the most sacred name; so is the Gurunaam.” I am therefore starting a bank, a bank of the Ramnaam, the name of God.”

These words of Sadguru Shree Aniruddha marked the initiation of the project, which meant to provide joy and fill happiness in the lives of all Shraddhavans. This unique project, launched on 18th August 2005 is known as the ‘Aniruddha’s Universal Bank of Ramnaam’.

In the ‘Ramraksha Stotra’, Shree Shiva tells Parvati, “O Manorama, I immerse Myself and enjoy saying ‘Rama Rama’. Uttering but once the name of ‘Rama’ is equal to the uttering of the thousand names of Shree Vishnu. The Ramnaam is as powerful as the ‘Vishnu Sahastranaam’ (thousand names of Shree Vishnu).” Thus, the Ramraksha, a stotra as well as a mantra, explains the glory of the Ramnaam,

A common man still gets cold feet when it comes to a bank, banking transactions and its rules. However, the ‘Bank of Ramnaam’ drives away all sorts of fears, problems and anxieties. Every Shraddhavan feels the close bond with this Bank, which is based on simple rules.

In the very first month of its inception, 43,138 accounts were opened, and 62,158 Ramnaam books were deposited with the Bank.

Ramnaam Book and its importance 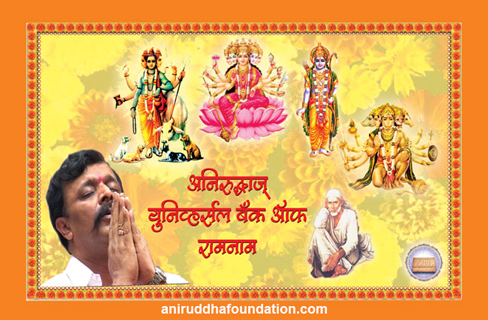 The Ramnaam book, which comprises 220 pages, provides all a golden opportunity to write as well as recite the name of God and name of Sadguru. Ramnaam is to be written on the first 108 pages of this book which is followed by 28 pages each of “Shree Ram Jai Ram Jai Jai Ram”, “Krishna”, “Dattaguru” and “Jai Jai Aniruddha Hari”. Every name on every page of the Ramnaam book is written on the watermark of Shree Hanuman, the torchbearer on the path of ‘Bhakti’ and a server of Shree Ram.

Writing Ramnaam inside the outline of Shree Hanuman carries particular importance. When the army of ‘Vanaras’ was to build a strong bridge from Rameshwaram to Lanka to bring back Seetamai, the architects among them, Nal and Neel, began with the construction of it. They had received education in architecture under Rishi Bhouma, who was the greatest of the teachers of the subject then. At that time, Shree Hanuman, realizing the enormity and rarity of the work, began writing the Ramnaam on each and every stone, which was used in the construction with his own hands. Because of the ‘Ramnaam’ inscribed on every stone, the massive and lifeless rocks and stones did not submerge in water, but floated instead, and lead to the formation of the bridge. Shraddhavans firmly believe that when they write the Ramnaam book, Shree Hanuman very easily builds bridges in their paths across multiple births.

Explaining the importance of the Ramnaam Bank, Sadguru Shree Aniruddha says, “Aniruddha’s Universal Bank of Ramnaam” is a highway for chanting God’s name, which leads even a common Shraddhavan on the path of a happy life and provides him with firm support.”

Sadguru Shree Aniruddha released the Ramnaam book for all Shraddhavans stemming from his solicitude as he wants them to gain merits from writing and chanting of the holy mantras.

We can also write this book for someone else on special occasions such as birthdays, anniversaries or also for their happiness and well-being and deposit it, dedicated to them. The Ramnaam book is designed in such a way that it endows merit on both the writer and the person for whom the book is written. Shraddhavans also believe that writing the Ramnaam book for a deceased person is a course to divine grace for the departed.

While writing Ramnaam book, the person writing it naturally performs one of the nine forms of ‘Navavidha Bhakti’, the “Shravan Bhakti” (listening) as while writing, the mantras are not only read but are also pronounced and thus listened. Therefore, Ramnaam book is a pure and sacred way of worship and meditation. 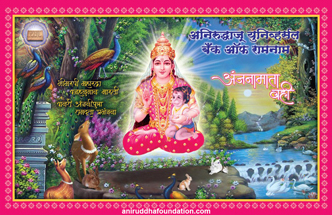 In 2011, on the occasion of ‘Shree Varadchandika Prasannotsav’, Sadguru Aniruddha gave a unique gift to the ‘Aniruddha’s Universal Bank of Ramnaam’ to help everyone to increase propinquity to God and to succeed on the path of ‘Bhakti’ more effectively. This gift was the ‘Anjanamata’ book.

Anjanamata (Aadimata Anjani) is the mother of ‘Mahapran’ Hanuman. Shree Hanuman is the only one who possesses the ‘Swaha’ (complete dedication) and the ‘Swadha’ (self-sufficiency), both the qualities together at the same time. Hence, for us to obtain them, the book has been designed in such a way that the mantra ‘Om Harimarkataya Swaha’ is written below the left feet of Shree Hanuman.

The currency in which this one-of-its-kind Bank deals in is only the Ramnaam and also the other chants given in the book. One can become a member of this Bank by simply submitting a completely written Ramnaam or Anjanamata book. Every Shraddhavan gets a passbook after becoming a member.

Sadguru Aniruddha says that whenever a Shraddhavan is in need of help or firm support during the difficult phases of his or her life, the Sadgurutattva or the Paramtattva will provide him all the necessary help through this ‘bank of Bhakti’. The interest provided to every individual will be in the form of Bhakti, which will be in proportion to the faith, love and affection he or she has for their Sadgurutattva.

The accounting year of the Bank is from ‘Aniruddha Pournima’ (full moon day of the Hindu month of Kartik) to ‘Aniruddha Pournima’. All the ‘Sadguru Shree Aniruddha Upasana centres’ are the branches of this Bank. With the Bank being universal, a Shraddhavan can submit a Ramnaam book in any of the centre branches.

Everyone must write and complete their book by themselves. The first page of the Ramnaam book (the ‘Arpan Patrika’) contains the name of the person who has written the book, his account number and the name of the person for whom the book is written. All such ‘Arpan Patrikas,’ i.e. the first pages of the books that the Shraddhavans submit are collected and worshipped on the full moon day or the eleventh day (Ekadashi) of the Hindu calendar months.

On submitting a minimum of 18 books in a year, a Shraddhavan gains annual membership of the Bank. On submitting 150 books in a period of 5 years starting from the date of the opening of the account, a Shraddhavan gets life membership of the bank. Also, Shraddhavans get numerous other benefits on the submission of a particular number of Ramnaam books. Idols of Shree Ganesh and also the ‘Sacchidananda Paduka’ are made from the pulp of these books submitted by Shraddhavans. Thus, apart from the pious medium of ‘Bhakti’ (worship), ‘Aniruddha’s Universal Bank of Ramnaam’ also contributes significantly to the protection of the environment in real life. 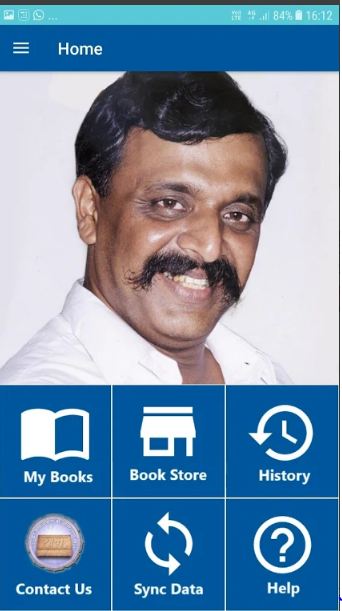 As of today, lakhs of Shraddhavans have become members of this unique Bank, started by Sadguru Shree Aniruddha Bapu in the year 2005, and are relishing the simple journey on the path of ‘Bhakti’.

However, following the changing times, a new and unique form of the Ramnaam book, under the guidance of Sadguru Shree Aniruddha has been made available to the Shraddhavans.

This App is available on the Google Play Store at https://play.google.com/store/apps/details id=com.ramnaam_bank.ramnaambook. Opening an account in ‘Aniruddha’s Universal Bank of Ramnaam’, buying a Ramnaam book and writing Ramnaam is very easily done through the app and all of that without going anywhere! Once a book is bought, the app lets users write Ramnaam even when offline, thereby removing all the hindrances in writing the Ramnaam. This app allows buying and adding another Ramnaam book in the account, and also auto-updates the account details of the users.