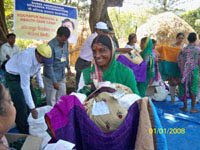 Generally Medical camps are organized for one day. These camps are organized for local villagers who reside in the remote villages. These camps which are held year after year provide only basic medical facilities to these villagers and sustain them only for a few days. But the medical camps which are organized under the skillful guidance and supervision of Sadguru Shri Aniruddha Bapu are based on detailed scientific research which is done keeping in mind the population of the villages. ‘Prevention is better than Cure is the main essence and credo of this camp.

For the last seven years the organizations running under the principles and guidance of Sadguru Shree Aniruddha viz., Shri Aniruddha Upasana Foundation, Aniruddha Aadesh Pathak and Dilasa Medical Trust and Rehabilitation Centre, etc have been organizing ‘Kolhapur Medical and Healthcare Camp’ every year on a large scale.

In this eighth year of the camp, a change for the better has been observed amongst the villages and the villagers who are availing benefits of the various facilities provided in the Camp.

SUCCESS OF THE KOLHAPUR MEDICAL CAMP:

The conclusions from the organization of these Camps for last eight years are extremely constructive and astonishing.

A Common feedback given by many children is as follows:

“We now go to school. We wear new clothes, caps and pair of sandals and also play cricket and football in school.”

Earlier, many of these children who expressed their views were not attending school. Only after the distribution of basic necessary things like Uniforms, sweaters to protect them from the cold, Candles and matchboxes for them to study, Slippers to help protect their feet, health tonics to improve their physical health are given by the foundation in this camp, the same students who were not attending school due to non availability of the above material have now started attending school regularly and are building their lives. Not only their educational problems but also the health related problems are keenly looked after in this medical camp. The changes observed at social and personal level that are caused by the medical camp have surprised and astonished everyone.
When this camp was started many girls were unable to comb their hair due to matted hair and louse. This year the same girl-students have neatly combed their hair; few girls have put flowers in their hairs too.

The prior preparation of this noble/ mega camp is done very meticulously with great conviction. Behind the success of this medical camp lies the entire year’s efforts of the volunteers from ‘Shree Aniruddha Upasana Foundation’ and its sister organizations. Small farmers in this area did not harvest their agricultural land as to provide their helping hand in this sacred work. The land on which Camp is conducted is actually rice cultivating fields and hence is always filled with excess water. The volunteers and villagers excavated moat to allow passage for water. After the land dried up, the volunteers leveled the land and three layers of cow dung were spread over the land to smoothen it. This was done so that the villagers who walk bare footed do not get blisters and also the volunteers who work do not suffer from heat stroke or sun burn.

On the very first day of the Camp distribution of the basic necessities and medical aid under Sadguru Shri Aniruddha’s ‘old is Gold’ (Juney te Soney) scheme covered under 13 Points Programme. This year basic necessities and hygiene material was provided to 5860 families spanning across 68 villages. The chart of all the villages as well as each and every individual of each house, who were attending the Camp, was already prepared by the volunteers from Kolhapur. The chart had the details of number of gents, ladies, boys, girls in the family along with their respective ages. According to the chart, clothes of the respective age group were already packed in bags and tags were attached to them which denoted the name of the family members. The clothes included shirts, trousers for men, sarees and salwar kameez for ladies and also clothes for young children according to age groups. Similarly quilts, sweaters, household utensils, toys for children., Various hygiene materials like water purification liquid (to nullify the impurities in water), Gamabenzin lotion (medicine for anti lice and itch), hair comb, nail cutter, soap, toothpowder, washing powder, etc were also provided in plenty per family. Ladies who wear nine yard sarees were given new nine yard saree and also bangles. The joy on the faces of these innocent and poor villagers knew no bounds. Moreover their bliss was further maximized by the fact that all these things were sent by their beloved Shree Aniruddha who for some villagers is their Sadguru but at the same time is a father figure for the children and a son for the elderlies.

Day 2 of the Camp – Medical Camp

Even though the previous day was extremely hectic and hard work filled, volunteers had reported at the camp site by 8:00 in the morning. There was no exhaustion or tiredness on their faces. Rather they were all geared up and were cheerfully waiting for the start of the camp. To their blissful surprise they were greeted by Param Poojya Nandai and Param Poojya Suchitdada right at the entrance gate of the camp.
Second day of camp (medical camp) was the actual day of the medical camp. Here villagers were provided with free health checkups. Thousands of the villagers arrived at the camp site from nearby villages to take the advantage of this golden opportunity. Their check-ups were done by trained doctors who were assisted by the volunteers of the Foundation.

From this year the biggest addition in the camp was the provision of the facility of transportation provided to school children and villagers so that they all could benefit from the Camp. A fleet of 25 trucks, 78 tempos and 10 Sumo Jeeps a total of 80 vehicles ferried all the villagers in 240 rounds in a single day.

This year the Foundation had shortlisted 127 schools for participating in Camp. From all these schools complete details of 9697 students’ were collected and kept ready by the volunteers. Two new schools joined the camp along with their all students on their own. This happened for the first time in the history of the Camp at Kolhapur.

As soon as the children reached the camp they were provided with caps and glucose biscuits. The Volunteers were continuously providing drinking water to them.

Every student underwent preliminary health checkup. Every student was given Calcium and multivitamin tonics namely Proto Honey and Proto Orange Syrup and De-worming tablets. Further they were provided the medicines as per their respective diagnosis.

ESSENTIAL THINGS GIVEN BY FOUNDATION:

After checkup the children were sent to the distribution area. Here all the students were provided with two sets of their respective school uniforms (printed as per the colour scheme of their respective school), slippers (as per their feet size), Candles and matchboxes, sweaters, and packets of dry fruits. Further, every school was provided with sports material viz., cricket kit, rings, skipping rope, footballs and rubber balls to encourage students to play outdoor sports.

80,000 villagers from 281 villages took benefit of Mahaprasad served under Annapurnaprasadam programme. Here every person was provided with sumptuous, wholesome and delicious meal of Spiced Rice (Masale-bhat), Mix Vegetables, Spicy Lentil Soup (Dal /Amti), Pickles, and Jalebi (An Indian traditional sweet). Villagers had waited in serpentine queue from four o’clock in the morning to take advantage of this feast.

With his unconditional love toward each and everyone, Sadguru Shree Aniruddha Bapu planned and launched this medical Camp for the neglected classes. With a determined resolution and the divine blessings, the activity which started from grassroots has today bludgeoned into one of the biggest held medical camp in the history of mankind.