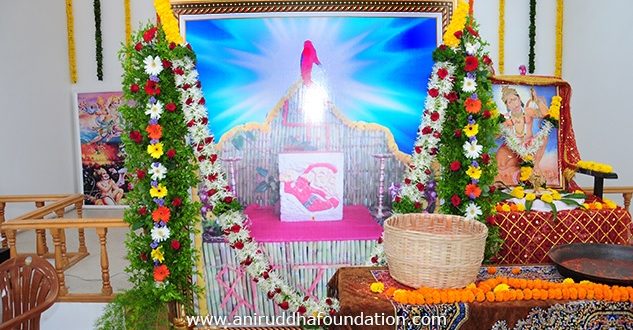 The one, who innumerable Shraddhavans religiously worship and recite the jap (chants) of every day, as also in his praises recite his stotras with joy across India; who can be ascribed by infinite names such as Hanumanta, Maruti, Anjanisuta and Kesarinandan, is Shree Hanuman. The one who Shraddhavans foremost evoke as Sankatrakshak (protector from adversities), to relieve them after being caught in any adversity, is Hanuman. The one, who the Bal Upasak (worshippers of strength and power) consider a deity that symbolises bal (power) and saamarthya (strength) and revere as their own, is Hanuman. The ‘Chaitra Pournima’ (full moon day in the Hindu calendar month of Chitra) is celebrated as ‘Hanuman Pournima’ across India. Amongst the innumerable names of Shree Hanumanta, the name which is revered as the greatest, is Sitashokvinashak (the one who destroys the grief of Sita). There is a story based on the name and its connection which reveals as to why the Chaitra Pournima is celebrated as the Hanuman Pournima. Sadguru Shree Aniruddha (Bapu) has elucidated the story several times through his discourses, and also taught them the way to perform the Bhakti of the Bhimrupi Maharudra (Shree Hanuman ).

Bapu had articulated the importance of Hanuman Jayanti to all the  Shraddhavans. “If one listens to Ramayan carefully, one may apprehend that Shree Hanuman, within only a few moments from his birth, leapt towards the sun perceiving the red hue to be a fruit with the intention of eating it. Coincidently, at that same instant, even Rahu arrived to swallow the sun, which meant that there was a solar eclipse on the day. A solar eclipse always takes place on a new moon day.

The day Hanuman first approached Mother Janaki whom Ravan kept captive in the Ashok Van (forest), he convinced her of his identity as an emissary of Shree Ram by presenting Lord Ram’s ring to her. Also, Mother Janaki then welcomed Shree Hanuman as both, her son and a respected elder.” This is the very day which is celebrated as Hanuman Pournima.

This was also the day when “Mother Sita recognized Lord Ram’s prime deity of worship, Shiva and his incarnation in the form of the Maharudra (which is Hanuman). Hanumanta rid Mother Sita of her misery (shoka), thus, Shree Hanumanta is also conferred as ‘Sitashokvinashan’ (destroyer of Sita’s grief). It was the very same day on which Hanumanta met Ravan and counselled him to provide him with an opportunity to amend his wrongdoings. However, Ravan blinded by his ego and arrogance released instructions to have Hanumanta’s tail set on fire, which ultimately resulted in Hanumanta burning down Ravan’s entire golden city of Lanka”. This is what epitomises the importance of Hanuman Pournima.

Thus, Hanumanta initiated his mission to destroy the evil on the day of Chaitra Pournima and hence, this day is truly celebrated as Shree Hanumanta’s birthday.

The tale of the odyssey of Shree Hanumanta in which, he took a leap from the southern tip of the then Bharatvarsha and reached Lanka in one go; met Mother Sita to convey Shree Ram’s message; destroyed Ravan’s extremely precious Ashok van and returned to meet with Shree Ram once again; is the ‘Sunderkand’. Bapu has directed Shraddhavans to recite the Sundarkand, the Hanuman Chalisa at least three times a day regularly, as also to recite the Maruti Stotra and the Panchamukha Hanumat Kavach diligently. Through his discourses (Pitruvachan) on numerous occasions, he had articulated over the importance and underlying meaning of the jap mentioned above and stotras of Hanumanta. Under Bapu’s guidance, scores of devotees recite the stotras every day.

Sadguru Shree Aniruddha Bapu has installed the idol of Panchmukhi (one with five faces) Hanuman at ‘Atulit Bal Dham’ in Ratnagiri. The pious occasion of Hanuman Pournima is celebrated here every year. Shree Hanumanta is Sadguru Shree Aniruddha’s ‘Rakshak Guru’  (Protector Guru). Every Thursday, at the main stage in Harigurugram, a big portrait of Shree Hanuman is always installed along with other sacred representations and motifs for the Upasana. The jap ‘Om Shri Ramdutaya Hanumantaya Mahapranaya Mahabalaya Namo Namah |’ is chanted collectively during the Thursday Upasana. The same jap is chanted ceaselessly during Hanuman Pournima celebrations every year at the Atulit Bal Dham. The event thus sees mass participation from Shraddhavans.

The presiding deity of the Shama Yantra (a sacred instrument which grants forgiveness), situated at ‘Shree Aniruddha Gurukshetram’ is Shree Hanumanta. Shree Hanumanta along with the Aatmalinga, is one among the Chandika Kul (family). Shree Hanumanta is also the deity of the Adnya Chakra from the Shreeshabda Dhyan Yog, which happens every Thursday at Shree Harigurugram. Sadguru Shree Aniruddha had himself carved an idol of Shree Hanumanta from a rock, the obeisance to whom can be paid by the Shraddhavans every Saturday in the month of Shravan (Hindu calendar month) during the Ashwattha Maruti Poojan at Juinagar Gurukul.

This thus naturally encourages Shraddhavans in large numbers to recite the Hanuman Chalisa during the period. Shree Hanumanta resides within each human in the form of ’Mahapraan’. He is the protector of all the Shraddhavans. It was Shree Hanumanta who helped Bibhishan reach Shree Ram. Moreover, Shree Hanumanta epitomises the way one must commit completely towards accomplishing the cause of and the way one should perform Bhakti of Shree Ram.  Hanumanta always exudes the greatest zeal for the Ramkaarya (cause of Shree Ram). He was instrumental in bringing together Shree Ram and Vanar King, Sugreeva thus, helping him secure his kingdom back from Baali. By performing Shree Ram’s Gunasankirtan before the Vanar Sainiks(soldier), he encouraged and involved every one of them in Shree Ram’s cause. Despite being ‘Buddhimataam Varishtham’( the epitome of knowledge and wisdom) himself, he carried the expedition to search for Mother Sita, under the leadership and guidance of Angad. Hanumanta allowed himself to be tied up under restrains and presented in Ravana’s court as also to be treated with contempt by demons. Such is the Hanumanta, whose stotra and mantra Shraddhavanas chant as they celebrate the Hanuman Pournima every year.

Bapu has said that “Every human being initiates his journey on the Bhaktimarga (path of devotion) and each step in it, only under the watchful guidance of Shree Hanumanta. He leads every Shraddhavan on the Bhaktimarga holding them by the finger, which is why it is imperative to worship him. Hanuman Pournima is, therefore celebrated with extreme joy and gaiety by the Shraddhavans.