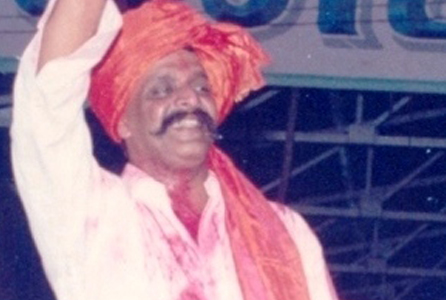 Saints and pilgrims with extreme self-assurance say, “Jevha Navhtya Ganga-Goda, Tevha Hoti Chandrabhaga” (When did not exist the Ganga and Goda rivers, there existed the Chandrabhaga), “Aadhi Rachili Pandhari, Mag Vaikuntha Nagri” (He first created Pandharpur and only then did he create the Vaikuntha(heaven)).

In the year 2001, Sadguru Shree Aniruddha (Bapu) had organised a Bhavayatra (an emotional journey) to the Shreekshetra Pandharpur, the residence of the deity who is affectionately invoked by the Shraddhavans with innumerable names such as Pandharinath, Vitthal, Vithu, Pandurang.

Sadguru Shree Aniruddha announced the Bhavyatra after four Rasayatras of Shirdi, Akkalkot, Alandi and Mangesh Shantadurga-Goa had taken place. This announcement passed a wave of enthusiasm within every Shraddhavan who was present at the time. All of them keenly awaited for the Bhavayatra to commence.

“Bhakti is the 16th affluence that we receive along with Lord Vitthal at Pandharpur. The Saints believe that Pandharpur is their mother’s home, the Chandra Bhaga their sister and Pundalik(who was an ardent devotee), their brother. A devotee walks on the path of Pandhari(Pandharpur) only to attain their mother’s home, this 16th affluence of Bhakti”, said Bapu while speaking of the peculiarity of this Pandharpur Bhavayatra. Bhakti (devotion) is the only agent between the Parmeshwar and the devotee, and nobody else.

Bapu had also said that this Bhavayatra is extremely necessary to make the best of our life, to immerse ourselves entirely in the divine name of the Parabramha Savala Vitthal and to bring back the everlasting treasure of euphoria along with us with love. Such was the 4-day Pandharpur Bhavayatra, which began from 5th May 2001 and concluded on 8th May 2001.

The first day of Pandharpur Bhavayatra 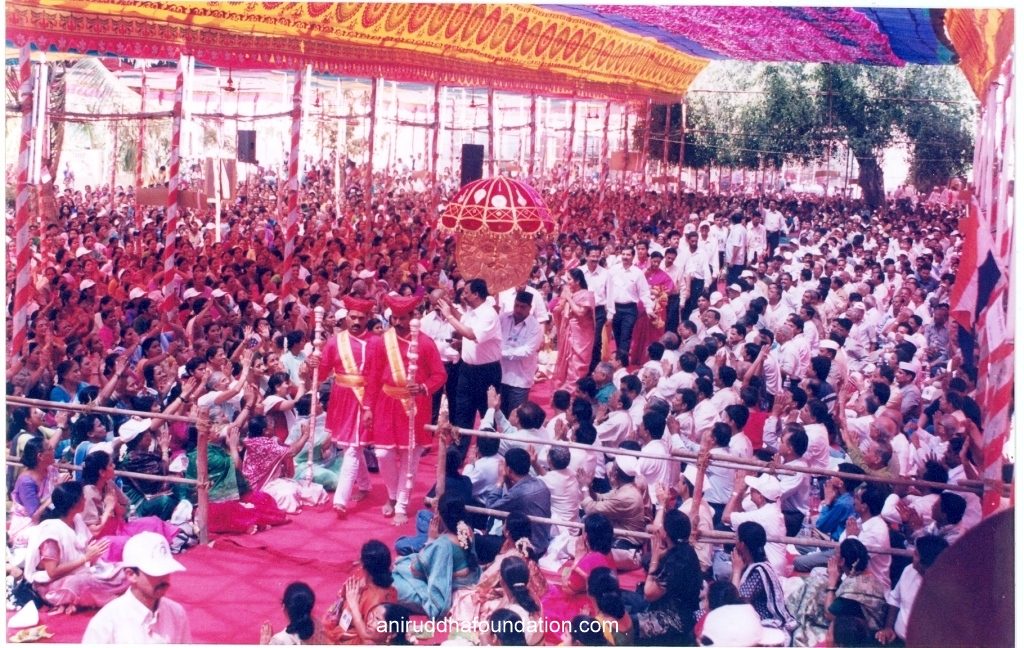 All the Shraddhavans reached the sacred Shreekshetra of Pandharpur on the evening of 5th May 2001. When Bapu arrived at 10 PM, all the Shraddhavans rejoiced as their joy knew no bounds when they saw their Sadguru. Everybody along with their Sadguru Shree Aniruddha saw the ‘Sant Dnyaneshwar’ film after dinner. The wave of devotional sentiments overwhelmed every Shraddhavan after watching this evergreen film, which is an epitome of devotion (ananyabhav) towards Pandurang. Thus, the Bhavayatra commenced dynamically by praying at the lotus feet of great saint Dnyaneshwar Mauli!

All the Shraddhavans assembled in the Pandal (pavilion) in the morning for the event. To begin with, all Shraddhavans had the fortune of receiving guidance from Sadguru Shree Aniruddha. “The Mahavishnu, the one who equally controls the light and darkness, Himself is Pandurang! Pandurang stands for fair complexion (gaur varna), but the saints also address him as Kaala, Sawla (of dark-skinned complexion), which only means that he is fair and also dark, both at the same time”. While speaking at this time, Bapu said, “Our sentiment towards the Pandurang should be such that we feel, He belongs to me and I want to belong to Him!”.

Every Shraddhavan was determined to get drenched in love for Vitthal as describe by Sadguru Aniruddha. Later, the Shraddhavans were given wet soil and Archandravya (sacred offerings). They had to make a Conch (shankha), a Chakra, a Mace (gada) and a Lotus (padma) by moulding the materials in the time between when Bapu said ‘Hari Om’ to indicate a beginning of the task, till he ended it by saying ‘Hari Om’ once again. They made all of the Mahavishnu’s weapons (Ayudhas) very devotedly while chanting the mantra ‘Shri Hari Vitthal, Jai Hari Vitthal’. Afterwards, all the Shraddhavans offered the Archandravya on these Ayudhas, while the Pandurang Gayatri Mantra was being chanted for 108 times. 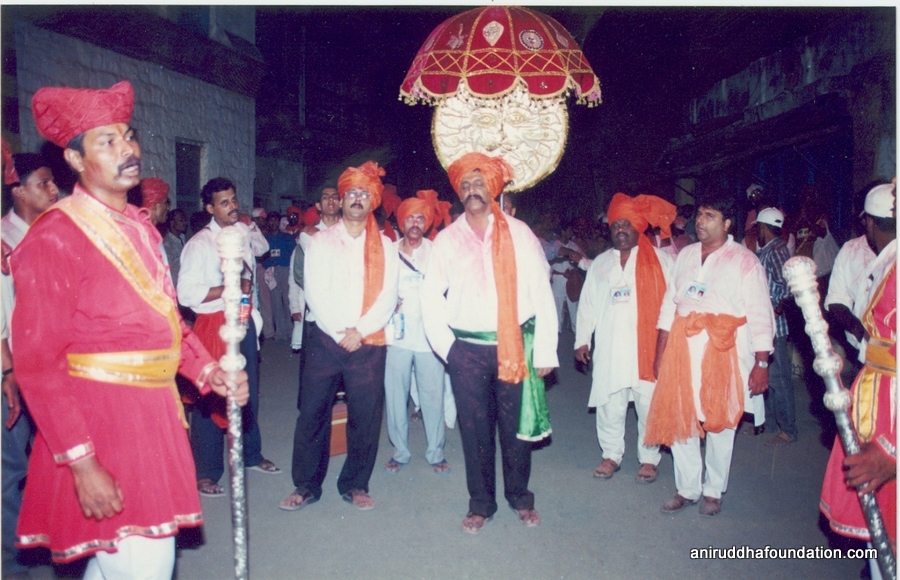 Later, Tulsi leaves were offered on the Ayudhas. At the time, Bapu had urged Shraddhavans to pray by saying, ‘Oh Lord, may at least one of the Ayudhas enter into my life and destroy my ill-fate ”.

After Sadguru Shree Aniruddha made Shraddhavans perform the novel poojan of Lord Mahavishnu, the ‘Shree Pandharinath Padmarag Pandurang Rathyatra’ (a festival of chariot journey which comprises of a procession) began in the evening.

Actually, this Rathyatra was to commence in the afternoon itself. Even so, Param Pujya Bapu was affectionately concerned for his Shraddhavan friends so that their feet do not get burned in the scorching afternoon heat. Thus, the Rathyatra was decided upon to begin in the evening.

Bapu offered guidance to all the Shraddhavans and told them that while pulling the chariot, I should believe that I’m the Parmeshwar’s vehicle. Moreover, I should also hold the humble sentiment that I’m His Vahaan (his carrier), which would imply to be His footwear. Understand this that once He wears the footwear, He is the only one, who will carry the burden.”

Everybody was highly gratified after they saw the magnificent idol of Lord Vitthal in the chariot, which weighed nearly 2 tonnes (2000 kg). There was an image of Shree Hanumanta and a placard titled ‘श्री पंढरीनाथ पद्मराग रथयात्रा’ (Shree Pandharinath Padmarag Rathyatra) atop the chariot. All the Shraddhavans experienced the immense joy of being witness to this procession with great admiration. A rope was neatly tied to the heavy chariot which all the Shraddhavans pulled while chanting Lord Vitthal’s gajar with faith, great enthusiasm and joy to draw the chariot ahead.

The ayudhas of Lord Mahavishnu moulded by the Shraddhavans in the morning were also offered at the feet of Vitthoba who was placed in the chariot.

The vibe here had turned immensely euphoric as thousands of Shraddhavans wearing saffron turbans and holding saffron flags danced to the beats of the evergreen gajars, ‘Jai  Jai Ram Krishna Hari’, ‘Majha Vithu, Majha Vithu, Majha Vithu, Vithu Vithu’, ‘Aala Re Aala, Majha Saawla Vitthal Aala’. The enthusiasm of the Shraddhavans drawing the chariot ahead was heightened as Sadguru Shree Aniruddha himself walked on the path of this Rathyatra with all.

The female Shraddhavans too were dressed in the traditional attire of the nine-yard(Nauvari) Saree, a Nath (traditional nose ring) and the like as they danced to the rhythm of Dhol-Taasha (Indian musical instruments) while pulling the chariot. Each Shraddhavan felt a complete sense of content and fulfilment in life while pulling the Vithu Mauli’s chariot. In the evening, everybody watched the film, ‘Sant Tukaram’ along with Bapu.

The focal point of the Bhavayatra was Shree Vitthal, and Shree Aniruddha screened this film for all the Shraddhavans to help them understand Sant Tukaram, who strengthens firm faith towards Lord Vitthal. 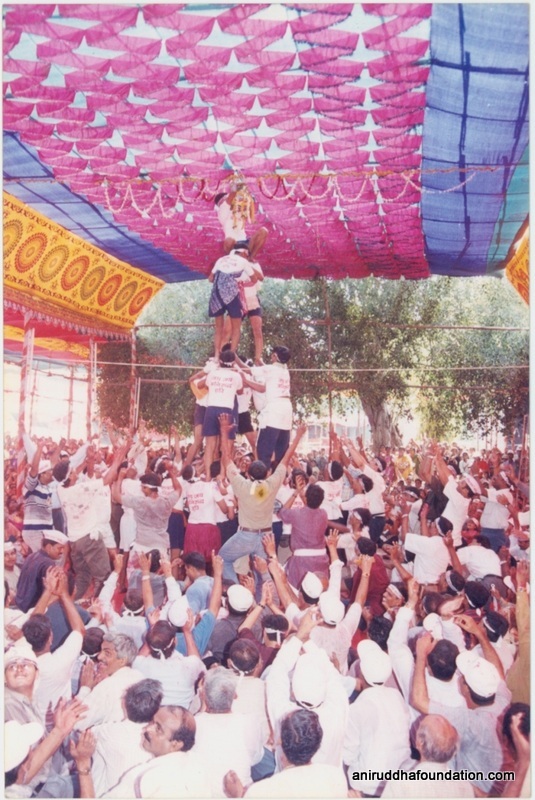 All the Shraddhavans took the darshan of Shree Vitthal in the morning on the third day of the Rathayatra. Sadguru Shree Aniruddha urged all the Shraddhavans to seek Lord Vitthal’s darshan with the only sentiment at heart, ‘O Lord, we want only you in our lives and nothing else. But do grant us only your faith!’. The Shraddhavans first sought the darshan of the step ascribed to Saint Namdev Maharaj followed by the mausoleum (samadhi) of Chokhoba Maharaj then paid their earnest obeisance to mother (Mauli) Kanhopatra, and only then did they bow down in reverence before Lord Vitthal. Previously, Bapu had narrated tales of these three great saints to all the Shraddhavans.

The egocentric poisonous Kaalia is the one who resides in one’s mind in the form of bad thoughts, sins and bad deeds. Whereas, Kaaliamardan is the means to destroy these symbolically. Thus, the Shraddhavans moulded a ‘Kalia Naag’ out of the clay. In their hearts, each of them prayed at the feet of Lord Vitthal, who is Shri Krishna incarnate that “May all of my sins and ego be destroyed”. They destroyed their sins in the form of this symbolic Kaalia, by first creating its representation out of clay while chanting the divine mantra, gajar of his name and then also destroying it while chanting the same sacred mantra-gajar. All the Shraddhavans felt joyous after performing the Kaalimardan and danced to the gajar very enthusiastically to celebrate it.

Even with the mere mention of the word ‘Dahikaala’ (or the Dahi Handi), one can picture the great celebration of the festival full of energy and fervour. Well, then this was going to be the Dahikala festival actually being celebrated in Pandharpur! The Handi was then broken amidst the incessant and rejoicing chants of ‘Govinda re Gopala’ and ‘Bolo Bajrangbali ki Jai!’ in an exuberant atmosphere by a three-layered human pyramid. Due to this, the Shraddhavans not only experienced a sense of affection, co-operation and brotherhood but also learned the value of performing Saamuhik Upasana (collective or mass prayers).

On the fourth day, the Haripaath (a composition of 28 abhangas by Saint Dyaneshwar) was performed in the presence of Sadguru Shree Aniruddha. This day was of the Vaishakh Pournima. As Sadguru Shree Aniruddha had shared the importance of the Vaishakh Pournima and described the greatness of performing Upasana on this day, every Shraddhavan’s sentiment of devotion had multiplied tremendously.

Later, all the Shraddhavans savoured the teerth and prasad of Kairi Panha(a drink made from raw mango) and Aambe Dal (a chutney made of raw mango and chana dal), which is considered to be ‘the most sacred prasad (offering to God) on the occasion of Vaishakh Pournima’.

Sadguru Shree Aniruddha conversed with the Shraddhavans at 5 o’clock sharp in the evening before leaving for the banks of the river Chandrabhaga. 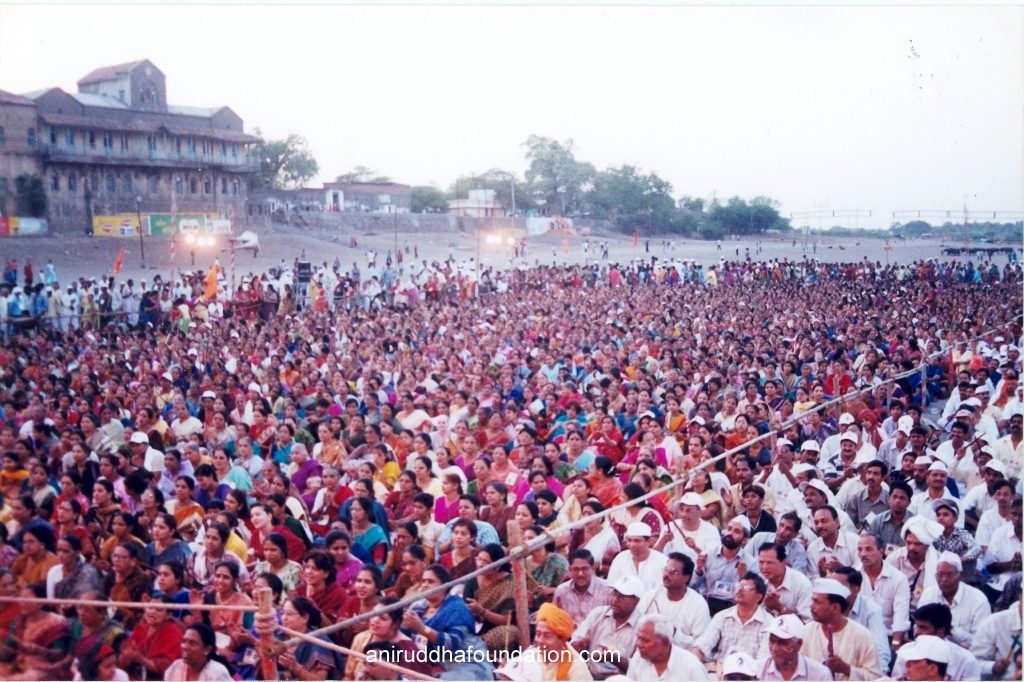 There were beautiful small pavilions set up at the banks of the river Chandrabhaga, and the charming picture of Shri Krishna erected on the stage which was before it and drew attention to itself. A wonderful sound system was installed too. Also, a provision was made for both, male and female Shraddhavans to play Tipri (or the Garba) separately. Shree Aniruddha himself was present on the stage, and everybody enjoyed playing with the Tipri to the Abhanga, “Khel Mandiyela Valavanti Ghai, Nachati Vaishnav Bhai Re” (On the desert banks a game has been set, all the Vaishnav(Lord Vishnu’s devotees) brothers are dancing).

Even after tirelessly lending a helping hand to His bhaktas and destroying the evil one yuga (era) after another, the playful Shri Krishna relentlessly continues to do so. Sadguru Shree Aniruddha narrated a traditional tale based on it and urged every Shraddhavan to play the Tipri with the only sentiment that ‘I am Shri Krishna’s Gop (friend)’.

Shraddhavan played the Tipri with a divine sentiment in their hearts, full of love, devotion, faith and joy with great enthusiasm, and a bundle of wholesome memories, which would last for the rest of their lives.

On the last day of the Bhavayatra, all the Shraddhavans recalled the joyous festival-like journey they experienced here, and their hearts filled with intense emotions with the thought of returning home. Pandharpur is known as the mother’s home for all the saints and the feeling of this Bhavayatra in the Pandharpur of Shri Vithal actually concluding had become unbearable for everybody. At the end of it all, Bapu said this to all the Shraddhavans the last time before leaving from Pandharpur,  “Live with the sentiment that ‘God! You certainly belong to me, but I want to be yours too!’ this will make each moment of your life worth cherishing, joyous and full of love”. Then, every Shraddhavan holding close these words full of love and compassion, with a very heavy heart and a bag full of happiness and passion, bid adieu to the memorable Bhavayatra!